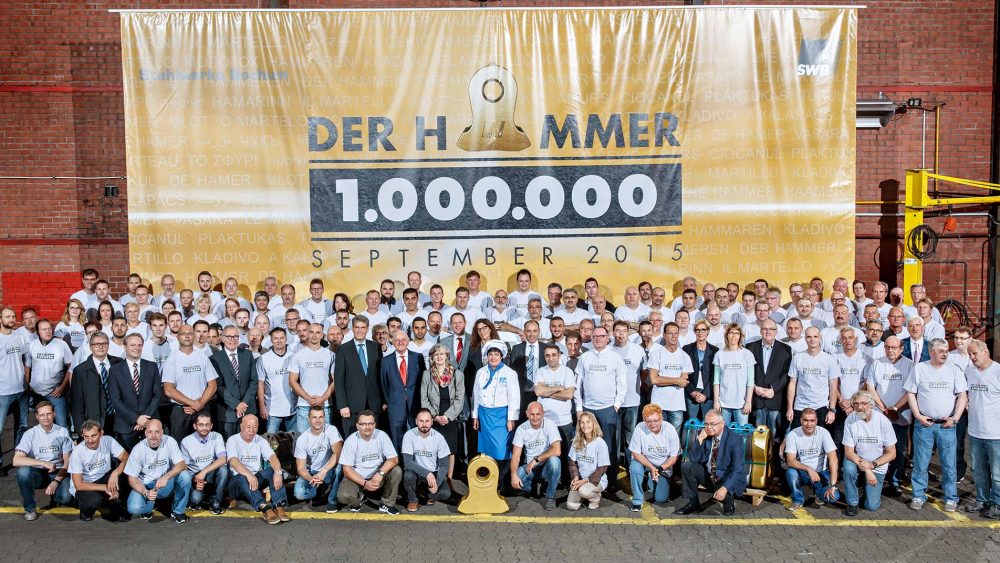 Stahlwerke Bochum GmbH (SWB) has reasons to celebrate: These days, its Bochum factory finished the 1,000,000th differentially hardened shredder hammer, which will be working hard in one of the 48 countries worldwide to which the company ships. It will serve an important task in scrap recycling and thus help conserve natural resources. The success story of this best-seller, invented by SWB 30 years ago and further developed up to this day, has been celebrated with some 140 employees, international representatives, and special guests. Plus, the company’s freshly designed Internet presence went online exactly in time for the jubilee.

30 years ago, SWB invented the differentially hardened shredder hammer. With its continuing development up to this date, the company is creating a success story. 1,000,000 pieces of this wear tool, which is used in shredders for cutting the secondary raw material scrap, have been sold to customers in 48 countries worldwide. This makes SWB the world leader in this market segment. Exports account for 75% of their turnover. Main buyer countries are the USA with Canada, followed by France, England, Belgium, Spain, and Japan.

Bruno Mayer, Managing Director with Stahlwerke Bochum GmbH and Managing Partner with SWB Holding GmbH, opened the ceremony together with his partners Wolfgang Callies and Stephan O. Mayer by giving a short retrospective on the company history. He thanked the employees and the attendant representatives from England, France, Italy and Poland for their continuing dedication to the company’s success.

In her welcoming address, the Lord Mayor of the City of Bochum, Dr. Ottilie Scholz, acknowledged the unbroken sequence of positive returns that the company has generated since its independence in 1989 as a reliable factor in the city’s yearly tax revenue and praised SWB as an equally reliable employer for 140 people.

After a group photo with all attending persons, the social part of the event began with the cutting of the giant jubilee cake, adorned with a golden jubilee hammer and the flags of the 48 countries currently supplied by SWB.

On the occasion of the jubilee, the Internet presence of Stahlwerke Bochum GmbH (www.stahlwerke-bochum.com) has been completely revamped. The site, available in six languages, has been expanded with a wealth of information and optimized for mobile device displays.

SWB products are used in processing plants like car shredders, scrap shears, stone crushers and other recycling equipment subjected to highest levels of wear. SWB wear parts have the highest resistance to abrasion, erosion and impact and therefore significantly improve the efficiency of the processing equipment in which they are used. The service offered by SWB includes application consulting and matching the wear parts to the design and application of the respective machines. SWB production is based on computer-aided simulation of the casting technology. The pattern production is followed by machine moulding for series in a semi-automatic moulding plant or by hand moulding for piece production of wear parts up to 7,000 kg. Depending on the level of wear, SWB supplies wear parts made of low and high alloyed steel as well as of cast special materials for highest levels of wear. A final individual heat treatment ensures that the quality and performance of the parts will match the high future requirements in each case.